Wednesday 15th October I carried out my first Hassleblad studio shoot with a female body.
I had a wonderful model called Annie who studies at my university and she kindly volunteered to model for my project (and I will hopefully be using her again!)

The photoshoot went rather smoothly and quickly and Annie was wonderful to work with.
I decided to treat this photo-shoot as another test shoot and only asked my model to stay in her underwear, purely because I wanted to work on the curves and her body shape and was still getting use to handling the Hassleblad itself.
I was stupid enough to forget my tripod so I hand held my camera which made the photoshoot go at a reasonably slow pace but I had music playing in the background and Annie and I were deep in conversation. I managed to develop the film (after much cursing in the darkroom trying to get my film onto the reel for developing) and was able to digitally scan everything using the fantastic facilities UCA has to offer.
Below are some of (what I feel are) my strongest images from this shoot. 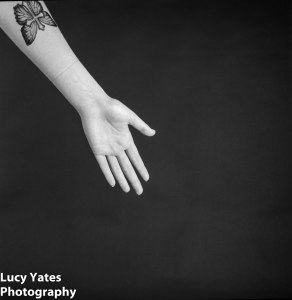 I went away feeling rather confident working with people for this style of photoshoot, however I felt that I was ‘winging’ how I wanted Annie to stand in front of the camera. Even though I was giving her clear direction of how I wanted her I secretly had NO idea on how I wanted her to stand/sit and was pretty much treating everything like a photographic experiment.

After having a Progress Review with the Photography’s GTA and around 8 of my classmates we all agreed that I should probably research looking into body forms and shapes to help me get a clearer idea of how models posed for paintings and photographs (which I will no doubt create a moodboard on Pintrest for purely for this) and to also research into the Anatomy a bit more in depth too.
I was also suggested to take a visit to London’s Victoria and Albert Museum to look at all the statues and how they are carved and moulded.